Concept Note for a Digital New Deal: Visions of Justice in a Post-Covid World

The Covid pandemic has starkly visibilized the underlying inequality and injustice of the global economic paradigm. It has not only exposed the cumulative failings of the neoliberal order, but also testified to the inevitability of crisis and catastrophe inherent to it.

For nearly half a century now – since the disavowal of the Keynesian/New Deal model and its replacement with neoliberal thinking – the devastating role of ill-conceived ‘development’ models in the Global South, promoted by the Bretton Woods system, has been widely documented. The push for free trade, free capital flows, and privatization of government functions, combined with a world trade and intellectual property system loaded in favour of the Global North has taken a toll on prosperity as may be desirable for the well-being of people and planet alike.

Scholars and activists have also pointed to how neoliberal economics needs to be understood for its shape-shifting character, suggesting that its ability to capture the discourse through agile adaptations explains, in part, its irresistible trappings. The flavour of neoliberalism, hence, needs to be grasped in relation to particular historical conjunctures.

In the late ‘90s, Seattle had seen a coming together of activists in a physical show of collective strength to push back against the ills of the World Trade Organization like never before. It was hypothesized that this was internet magic at its best, bringing people’s movements an all-new power. But the neoliberal nebula was already appropriating into its fold the digital; its discourse, techniques, and all. Fast forward to 2008, the Wall Street debacle demonstrated tragically the perverse symbiosis between unfettered global finance and a laissez faire digital network. Seattle, today, is a far cry from its 1999 version of people power. It is, as Charles Mudede, the Zimbabwean writer-film maker argues, the capital of neoliberalism, with corporate tech giants like Amazon creating an aura of irreplaceability and billionaires like Bill Gates preaching philanthropy as the solution to the social costs of capitalism.

Over the past decade, digital enclosures and data greed have consistently blunted the power of the internet and data-based intelligence as an emancipatory force. The platform economy is dismantling and reorganizing systems in their entirety – from communication, media, and transportation to commerce, agriculture, finance, and governance – hollowing out social and public value and ushering in a marketization of everything. The pandemic has only accelerated these trends.

Digital Dimensions of the Current Crisis

Today, a decade of heavy handed austerity measures in health has come to haunt Europe in this time of crisis, with healthcare systems sagging under the relentless demands of the disease. The situation in developing countries has been far more dire; at least ten countries in Africa had no ventilators and even the larger ones in the region, such as South Africa, Nigeria, and Uganda, were struggling with the lack of resources.

Besides the health emergency, the pandemic has also set off a systemic disarray with society-wide ramifications. Covid came at a time when the number of people facing hunger and malnutrition is slated to double, thanks to the failure of industrial food production systems that have precipitated disastrous ecological impacts. The role of Big Data in digital-age industrial farming goes much further in domesticating nature. From predictive insights in farming operations and real-time operational decisions to redesigning business processes, smart agriculture creates new value chains, servicing corporate profit with great precision. Without urgent course corrections, we may be hurtling towards an agro-ecological paradigm in which the farmer is rendered a small, deskilled, and dependent part of a highly sophisticated and centralized proprietary system, and intelligence-based technological choices endanger food sovereignty and livelihood sustainability.

The Covid conjuncture has also pointed to an unabashed opportunism of digital behemoths who have moved rapidly to entrench themselves firmly into our social and economic spheres. The most visible example of this trend has been the market dominance that e-commerce companies such as Amazon, Alibaba, Flipkart, and Mercado Libre have been able to garner through the crisis, placing themselves at the centre of trade and logistics in the short to medium term. Another instantiation is the push for the ‘platformization of schooling’, a trend that has reinforced traditional exclusions, as marginalized students without access to digital gadgets or connectivity in both the North and the South, find themselves left out. Meanwhile, UNESCO’s ‘Global Education Coalition’, an international partnership to help countries set up remote and online learning infrastructure, counts among its partners Google, Microsoft, Facebook, and Zoom – a sign of Big Tech’s burgeoning clout in core social sectors.

Globally, the ranks of the unemployed rise by the day, with the International Labour Organization noting that 37.5 percent of global employment will stand to be affected by the pandemic. Workers and small producers in the large informal economies of the Global South have fared the worst, with livelihoods shuttered indefinitely. The institutionalization of easy hire-and-fire, zero-hour contracting practices and the systematic rollback of social protections has exacerbated labor precarity. Low-end workers in sectors such as logistics, food preparation, delivery, healthcare, sanitation, retail etc., have been forced to accept constant and additional surveillance (temperature checks, location and contact tracing).

There has also been the creeping intrusion into citizen rights through the use of digital technologies and data systems. The pandemic has normalized mass surveillance by states through contact tracing, temperature checks in public areas, and location triangulation. As of June, 35 countries have reportedly adopted measures to track and surveil populations in an effort to combat the pandemic, with experts pointing out grave privacy and security issues in many such efforts. Concerns have also been raised that without clear sunset clauses, such measures may become woven into our governance fabrics in the long run, eroding citizen rights. Together, these pose a grave threat to deliberative democracy as states use this opportunity to further expand authoritarian powers.

While state excesses through digital means – legitimated through this moment of crisis – necessitate an urgent rearticulation of fundamental rights and guarantees, the manipulation of the online public sphere by the disinformation industry points to the huge complexities in preserving and sustaining democratic rights in the times of social media. Communicative environments controlled by social media empires are algorithmic publics that naturalize regressive tropes, promote misogyny, and enforce private standards to deal with public harm. They escape legal-institutional scrutiny in most countries, representing a normative crisis for pluralism and publicness.

In the face of the Great New Depression, the usual correctives to capitalism in the form of rescue plans for financial markets, large bailouts for corporations, and the buying up of corporate debt have been proposed and implemented by governments. In May, the estimated cost of global bailouts stood at $10 trillion. This signals a serious failure of imagination, as well as a refusal to recognize that the system does not work for the 99 percent. The trends described above are not mere outliers that can be explained away as an outcome of the pandemic alone. They need to be situated within the continuities of a larger trajectory in which the digital phenomenon has contributed to social outcomes that are exclusionary, extractive, and exploitative.

Yet, we cannot resign ourselves to the current frames of the digital paradigm rooted as it is in neoliberal logic. A brand new future is certainly possible, and the seeds of change are around us. Workers are mobilizing against platform giants, raising their voices against the poor working conditions of e-commerce, food delivery, and ride-hailing companies. Antitrust probes by the US and the EU, and proposals for digital services taxation have gathered momentum. Countries in the South are also grappling with policy frameworks for harnessing data’s economic value. New platform models are being explored that eschew value concentration at the top and promote equitable gains for workers.

As a time of flux, the Covid moment contains the potential to reshape the global economic and development order towards an equitable and just society. It presents a window to reject the status quo that is so deeply flawed. The task of radical change-making requires that at each historical conjuncture the ingredients making up the neoliberal plot be unpacked. Diagnosis alone is, however, insufficient. The digital needs to be reclaimed, and towards this, the purpose and meaning of the internet and data-based intelligence must be rearticulated. The institutional frames and global-to-local governance mechanisms of data and digital infrastructures (including platforms and standards) comprise the lynchpin in the battle ground between democratic futures for all and private profits for the few. These need to be clearly spelt out so that the forces of transformative change can mount a concerted critique and coordinated action.

Seizing this opportunity, IT for Change’s new project, ‘A Digital New Deal: Visions for Justice in a Post-Covid World’, seeks to engage progressive actors in an exercise to construct alternative digital frameworks, pathways, and institutional arrangements. We are inviting a series of essays articulating visions for digital justice in a post-Covid world. The essays will address themes that include, but are not limited to, e-commerce, Big Tech regulation, and trade justice; labor rights in a platform economy; agro-ecology, food sovereignty, and climate futures; small economies and sustainable alternatives; online public spheres and the future of democracy; feminist perspectives on the digital economy and society; tackling new authoritarianisms in a new world order; global governance of data and AI. The compendium will be a radical document that brings together cutting edge thinking on the building blocks of a digital constitutionalism. Each essay will answer the following questions:

The conversations of the project will also be carried over into a series of webinars late this year. 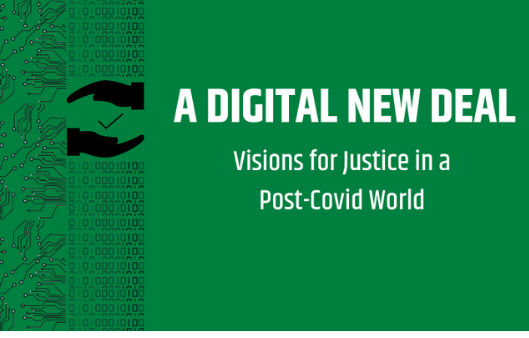