Where are the women in Digital India? Highlights from a Panel Discussion 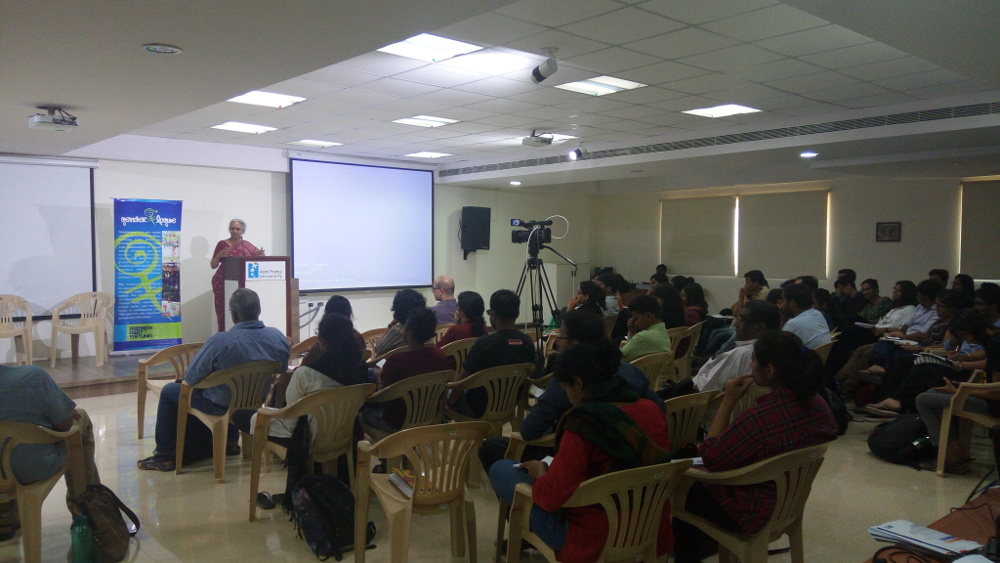 The gender disparities of the digital often mirror those of the socio-economic terrain. Whether it be the ‘teething pains’ of biometric based authentication in welfare service delivery that cause exclusion, or the many shocks to the system that ad hoc demonetization and push for ‘cashless’ has brought about. These developments have real and tangible gender implications which often get left out of the debates.

With a view to delve deeper into these debates, IT for Change and Azim Premji University (APU) organized a two day workshop titled, The Gendered Digital in the Network Society, on 3rd and 4th February 2017. In this event, which was supported by the Genderlogues program of the India office of Friedrich-Ebert-Stiftung (FES), students of development used a feminist lens to understand some key questions and themes surrounding technology, state policy and gender.

The first day of the workshop started with a panel discussion on ‘A Feminist lens on a Digital India’. It was headed by Bishakha Datta from Point of View, Usha Ramanathan, leading legal scholar and Anita Gurumurthy from IT for Change. Panelists looked at the phenomenon of Digital India, clearly one of the most ambitious and wide ranging governance initiatives to date - for its macro and micro implications and unpacked the paradigm from a gender perspective.

Usha Ramanathan spoke about the current situation where the state’s default assumption is that every citizen is suspect and technology is offered as the ultimate solution to all social, economic and political problems. In a critique of demonetisation, Usha noted the patriarchal nature of the policy, asserting that the so called fight against corruption has been devised to promote protectionism, and create fear in the minds of the people in order to open up new markets through digitalization. The welfare of the poorest women is being ignored in the push for digitalisation.

“The coercive power of the state comes with the digital, it is being introduced through a very deliberate illegality” - Usha Ramanathan

Following this Anita Gurumurthy pointed to how the state is portraying Digital India as the last resort to ensure efficiency in politics and development. She said that there has been a ‘reconstruction of politics as spectacle’ and thus the state and the digital have come together to deliver governance while the citizens are on the receiving end. In this process democracy is emptied of its contents in the public sphere and there is an ‘obscuring of gender politics and strategic manipulation of the digitalized public sphere’.

“In the cornerstone strategy of digitalisation of welfare one can see a tyranny of biometric authentication where someone is deserving, someone is undeserving and everyone is suspect”. - Anita Gurumurthy

She noted that there is a lack of adequate provisions for women within policy frameworks such as Digital India or Smart City. This indicates an IT led economic revolution that only reinforces the masculine desire to be a part of the global market place and does not address the needs of women. Research and the National Sample Survey Data reveal that there is no automatic percolation of benefits of economic growth, and the ‘trickle down’ promise of ‘the invisible hand’ stays to be ever unfulfilled, but never mind the research and evidence, digitalization, which is considered as panacea by the current government, can escort ‘growth-oriented development’, along with all the other socio-economic issues which it can presumably, very comfortably fix.

Anita concluded her presentation by proposing a re-imagination of digital constitutionalism in a cultural democracy, where economy and polity emerge in a new social contract which is feminist.

Bishakha Datta focused her talk on the digital nature of violence against women. She spoke about how, even though there is a tendency to blame the ‘digital’ for being a perpetrator of gender violence, we tend to forget that the ‘people who are a part of digital India are the same as those who are a part of physical India’. Drawing upon examples such as Khap Panchayats banning the use of mobile phones for unmarried women, Bishakha noted the ways in which the typical patriarchal norms of the physical world are perpetuated through the use of digital technology, using a false narrative of protecting women.

Speaking about online anonymity, Bishakha noted how it could be a double edged sword. While on one hand it may seem to be an escape for women and give them freedom in the online space, there are many times where men harass women anonymously, which makes it all the more difficult for the matter to be escalated legally. The harassment that women face online is quite similar to that which they face in the streets. Building an analogy from the Moroccan concept of ‘trespassing in the nude’, Bishakha pointed out the ways in which public streets are spaces that don’t belong to women, and their presence on them is therefore automatically coded as a transgression. Similarly, social media platforms becomes transgressive spaces – should women want to talk freely about politics or try to challenge gender inequality, and they are punished through trolling or worse.

Bishakha urged the audience to engage with a critical question- what does one imagine the digital space to be? We assume that women need access to the digital world so that they can edify themselves and learn new things, which can be partially correct, but the larger argument is that women should be brought out in public spaces online and offline, just so that they can be, and so that they can explore freedom without the veneer of paternalistic protection.

“Dress, time and place are all narratives of distraction, they are escape routes for men to justify their acts of violence against women, and if women also believe in these they will never be able to occupy public spaces as men do”. - Bishakha Datta

The interaction saw a rich inflow of thoughtful queries from students who were interested to know the nature of movements and organizations that are working towards addressing issues around digitalisation. There were viewpoints contesting the very need to challenge the current discourse on capitalistic digitalisation, with the argument that one has the choice of opting out of using these platforms and services. But the problems highlighted by the panelists are larger than individuals per se. In a democratic setup it is important to understand the complexities of the society to gain deeper understanding of ground level issues and phenomenon in the context of the ‘digital’, which is becoming bigger than all of us, and may not offer us a choice to escape the web.

The Gendered Digital in the Network Society