During a global discussion led by Brazil in 2014, India maintained that the internet is not merely an open, free, global commons that should remain untouched by major governmental control, but also a resource that needs to reflect the values of an ‘Equinet’ – a platform for commerce, e-governance, national security mechanism, to be achieved through fair playing rules established by a ‘globally acceptable legal regime’ and a ‘new cyber jurisprudence’. This idea still holds considerable relevance – much more, perhaps, in a world constituted by network-data infrastructures.

The reality is that the increasing claims of corporations on the internet and a new bipolar world order led by data and aritificial intelligence (AI) have made any movement towards a new cyber jurisprudence very difficult.

A Working Group on Enhanced Cooperation (WGEC) mandated by the United Nations (UN), held five meetings between September 2016 and January 2018. But it could not come up with a consensus. It concluded that “the complexity and political sensitivity of the topic did not allow the working group to agree on a set of recommendations.

The fact is that internet civil society globally and in India come from a tradition of technolibertarianism and cyber utopianism that reflects a deep antipathy to public policies. In the consultation by the Telecom Regulatory Authority of India (TRAI) on differential pricing (popularly known as the Free Basics controversy) much of civil society has been opposed to public intervention to provide free content. At the national level, we don’t really have a multi stakeholder committee and a public policy process along the lines of Brazil. Neither do we have a civil rights framework for the internet.

What we need to fall back on, when talking about people, purpose and process, is the question of normative principles. In the Free Basics debate, TRAI invoked the idea of internet egalitarianism; not a technical ideal of non-discrimination of packets. This is important considering that there are pending court cases today about what should be the basis for internet shutdowns. We see a clash of world views that often pit freedom and egalitarianism against security and public order, without a historical grounding of who, why and how.

The technical is but a reflection of the political economy – and this is an idea that needs to be unpacked.

We currently live in a time when the online-offline binary holds little meaning. Sociality and economic relations are mediated by the “space of flows”. Internet governance is no longer just about managing the Internet’s address book and root zone servers; it has to do with the pressing challenges of how to govern the public policy implications of social and economic interactions that are mediated by the data network.

As the UN Secretary General pointed out at the opening ceremony of the Internet Governance Forum (IGF), Berlin 2019, there are crucial public sphere concerns, and also the connection between digital advances and inequality. New technology has contributed to a steep rise in the number of billionaires over the past 20 years, he noted. He also underlined the UN High-Level Panel’s recommendation to maximize digital public goods. This means a range of things – public standards, public content, platforms, public e-marketplaces and more.

But there are also basic questions of access. Last year, Finance Minister Nirmala Sitharaman announced that, "To bridge rural-urban digital divide, BharatNet is targeting internet connectivity in local bodies in every panchayat in the country. This is supposed to be speeded up with assistance of universal service obligation fund (USOF) under public private partnership." However, the project is lagging behind, and India has missed the bus on institutional infrastructure.

The demand for local language content in India is growing at a rapid pace with 90 percent of new internet users in the country consuming content in vernacular languages. “Nearly 40 million users of the Internet were added from 2015-18 and nine out of ten such new users are Indian language users,” Google India said in a statement last year. These new users largely consume video and audio content on the internet in Hindi and other local languages.

But how are policies addressing the economic and social needs and rights of this set of users?

Deepfake online videos are burgeoning as tools and applications to make fictional content gets cheaper, lowering barriers for non-experts to make them.

Besides the freedom and privacy concerns raised by civil society, we now have new sets of actors. An important contestation in the internet domain is between big e-commerce companies and traders.

The Confederation of All Indian Traders (CAIT) has pointed to the anti-competitive practices of these companies. Small traders see a certain “collusion between the government and Amazon & Flipkart". CAIT representatives have said that the MSME ministry should instead work towards developing an independent e-commerce portal and on-board small traders independently. The Competition Commission of India (CCI) has meanwhile unveiled a set of self-regulation guidelines for the e-commerce sector, along with the findings of an e-commerce market study it initiated in April last year. It has asked for clear and transparent policies on discounts, including inter alia the basis of discount rates funded by platforms for different products/suppliers and the implications of participation/non-participation in discount schemes.

On the future of content governance, we seem to have come full circle, from the early phase where liability was high, to Shreya Singhal vs Union of India, and now measures for proactive filtering. We are waiting for the new guidelines.

The Brazilian experience with Marco Civil da Internet and Canadian copyright law show that rather than a notice-and-takedown regime, a notice-and-notice regime has the advantages that it: 1) provides the intermediary with more information to add context to a request for removal of content, 2) offers the author the opportunity to remove the content themselves, 3) triggers a fault-based liability on the intermediary only when there is a court order for restricting access.

In the data economy, India has been very active in the trade arena:

Second, India has decided not to be part of plurilateral negotiations on e-commerce at the WTO. The United States wants an e-commerce pluri-accord on digital trade at the World Trade Organisation to shield website owners from lawsuits and state prosecution for user-generated content. The US has listed an item for negotiations titled, “interactive computer services (limiting non-IP liability for suppliers and users and infringement of persons’ rights)”. This item seeks to internationalise the US legislative statute known as Section 230 of the Communications Decency Act of 1996 that continues to generate huge controversy in the US, a participant argued. According to this section, “No provider or user of an interactive computer service shall be treated as the publisher or speaker of any information provided by another information content provider.” This particular US statute, according to Harvard academic Shoshana Zuboff, has enabled “firms such as Facebook, Google, and Twitter” not to remove the “most egregious content from their landscapes.”

Third, India has held the position that data is a critical national resource, made a statement to that effect at the Osaka Summit, and refrained from signing the Regional Comprehensive Economic Partnership (RCEP).

The case for a new global and collective response to Internet governance cannot be dismissed at all. This must be expanded to a democratic governance of digital and data infrastructures.

In his address at IGF Berlin, 2019, the UN Secretary General also pointed to a real risk of a geopolitical rupture – a great fracture of trade, security and Internet systems. Low-intensity cyber-conflict between major States is not a future prediction but a feature of our present time. The potential dangers of this demand a much more vigorous collective response.

This paper was part of a consultation with the Indian Council for Research on International Economic Relations (ICRIER) and the Ministry of Electronics and Information Technology (MEITY). 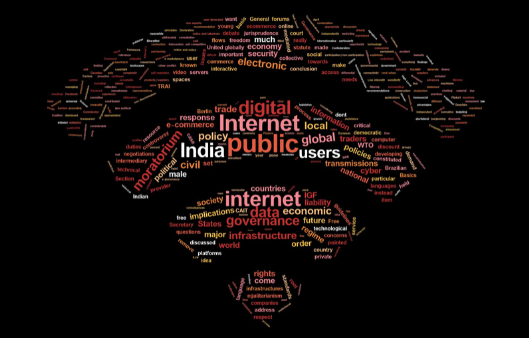