The Data Governance Network (DGN) was established by the IDFC Institute in 2019 to bring together some of India's leading policy think-tanks. It identifies policy gaps in data governance and seeks to bridge them through policy interventions, research and advocacy. IT for Change was selected to be one of the four research nodes in the DGN for our research rigor and evidence of engagement in policy domains.

Draft Paper on ' Beyond Data Bodies: New Directions for a Feminist Theory of Data Sovereignty'

November 2021: A global market in menstrual apps illustrates a new datafied regime of governmentality that erodes personal autonomy. Emphasizing that bodily sovereignty is integral to data sovereignty, feminist intervention has sought to tackle such violations of personhood by putting bodies back into data governance debates. This draft paper by Anita Gurumurthy and Nandini Chami demonstrates that such an approach may not be adequate to challenge the relations of domination encoded in data. It argues that what is needed, instead, is a shift in focus from reclaiming the materiality of embodiment to restructuring the material relations of data as a social knowledge commons. Centering a feminist relational ontology and ethics, the paper offers some concrete directions for collective social control over the health data commons. It shows how, in the final analysis, equality of autonomy in the datafied social is predicated on an expanded idea of data sovereignty – one that promotes the public commons of social knowledge, even as it strives to prevent incursions into the private space.

Draft Paper on 'Governing the Abstract Object of Data:Towards a Distributive Integrity Framework'

March 2021: This draft paper by Anita Gurumurthy and Nandini Chami presents the building blocks of an economic governance regime for data that can contribute to the growth of the digital economy by unlocking the potential of data. The de facto enclosure of data by platform monopolies not only creates a skewed market place with exclusionary effects, it also presents a huge opportunity cost in terms of the unrealized public and social value of data. The paper unpacks the limits of emerging approaches to data governance – both, individualist and collective – arguing why such frameworks do not go far enough. It offers a semi-commons approach to ordering the digital economy as a means to achieve ‘distributive integrity’.

January 2021: This working paper by Anita Gurumurthy and Parminder Jeet Singh discusses the need to focus on community approaches, away from an individualistic framework as well as critique the structural mechanisms of the draft legislation to govern data in the EU. Further, it extensively analyzes and compares the EU's Draft Data Governance Act, 2020 to the Indian framework for non-personal data.

December 2020: Anushka Mittal wrote a policy brief based on her paper titled, 'Exploring the Constitutional Tenability of Data Sharing Policies', which laid down one way to look at the constitutional arguments that may be applied to the recommendations of the Draft Non Personal Data Committee Report, 2020, relating to community ownership of data and data sharing methods. This policy brief summarizes the arguments made in the paper and focuses on the aspects that the framers of the law must keep in mind to balance rights and further the objectives of equitable distribution of data.

November 2020: Anushka Mittal published a research paper titled, ‘Exploring the Constitutional Tenability of Data Sharing Policies’, analyzing the recommendations of the Draft Non-Personal Data Committee Report for community ownership of data and data sharing, from the perspective of its constitutional status in India.

Working Paper on 'Breaking Up Big Tech: Separation of its Data, Cloud and Intelligence Layers'

June 2020: Parminder Jeet Singh authored a working paper arguing that traditional competition frameworks are inadequate to address the rapidly building digital power concentration. They need to be combined with perspectives from technology governance that focus on structural separation of technology-functional layers (a la net neutrality, but also more) to form a composite new approach to digital regulation.

January 2020: Parminder Jeet Singh and Anita Gurumurthy co-authored a policy brief based on the paper 'Data and Digital Intelligence Commons', which examined the current non-governance of aggregate  non-personal  data,  and  presented  a  new  approach  that  involves  treating  a  large  part  of  such  data  as  a  ‘common  pool  resource’. This  policy  brief summarizes the arguments made in the paper and  takes  them  forward to propose a concrete policy option; of developing a framework law for protecting and sharing the common resource of aggregate non-personal data.

Has India's Privacy Bill Considered the Dangers of Unrestricted Processing of 'Anonymised' Data? (The Wire)

January 2020: As part of the DGN's advocacy around the Personal Data Protection Bill, 2019, Anushka Mittal wrote an article highlighting the shortcomings of the Bill with respect to assuring privacy for anonymized data for The Wire.

Advocacy at the DGN's Eighth Roundtable

April 2021: Researchers from IT for Change, NIPFP, and IDFC Institute debuted their latest work at the DGN's eighth quarterly roundtable organized by the Internet Democracy Project. Nandini Chami presented IT for Change's draft paper titled 'Governing the Abstract Object of Data: Towards a Distributive Integrity Framework'.

Advocacy through the DGN's Seventh Roundtable

January 2021: IT for Change organized the DGN's seventh quarterly roundtable online. It included representatives from the four nodes of the DGN along with several external experts and participants. At this roundtable, we unveiled our proposal for our research on ‘A political economy analysis of National Open Digital Ecosystems'.

Researchers from Internet Democracy Project, IT for Change, iSPIRT, NIPFP and IDFC Institute also presented their work on the use of technology in government and during the Covid-19 pandemic.

Read excerpts from the discussion here

February 2020: Parminder Jeet Singh was a co-panelist, along with Justice (Retd.) Srikrishna, for a discussion on the Personal Data Protection Bill, 2019, organised by the Software Freedom Law Centre (SFLC). The panel discussed the contours, shortcomings and scope for improvement of the Bill with respect to anonymization, non-personal data and the conceptualization of harm as included in the Bill.

December 2019: IT for Change organized the DGN's third quarterly roundatble. It included representatives from the four nodes of the DGN along with several external experts. At this roundtable, we unveiled our proposal for our research on ‘Big Tech on a Leash: Regulating Data, Cloud and Intelligence’. This culminated into Parminder Jeet Singh's working paper on Breaking up Big Tech: Separation of its Data, Cloud and Intelligence Layers, published in June 2020.

At the core of the DGN's research activites are four institutional research nodes. DGN supports its nodes in undertaking long-term research projects on areas pertaining to data governance. The nodes are critical to developing the original research base and institutional capacity needed to effect policy change and promote good governance in India. The four nodes are:

While each node has undertaken separate research, they have all collaborated on the following initiatives.

Advocacy and Research on the Personal Data Protection Bill, 2019

May 2020: At the heels of the introduction and consultations on the Personal Data Protection Bill, 2019, IT for Change collaboarted with the other DGN nodes to share specific recommendations on a framework for protection of anonymised data, including provisions for penalty of intentional de-anonymisation of such data, consideration of unintentional de-anonymisation as a personal data breach and allowing research exemptions for the use of such data. 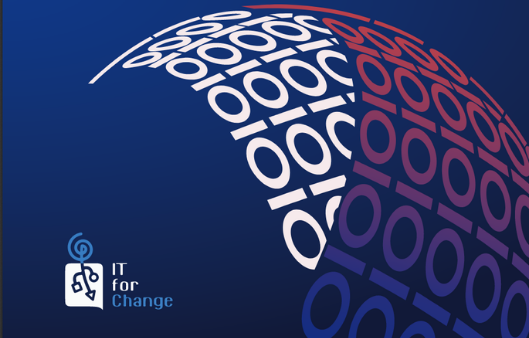