Combating domestic violence is a collective struggle, not an individual burden 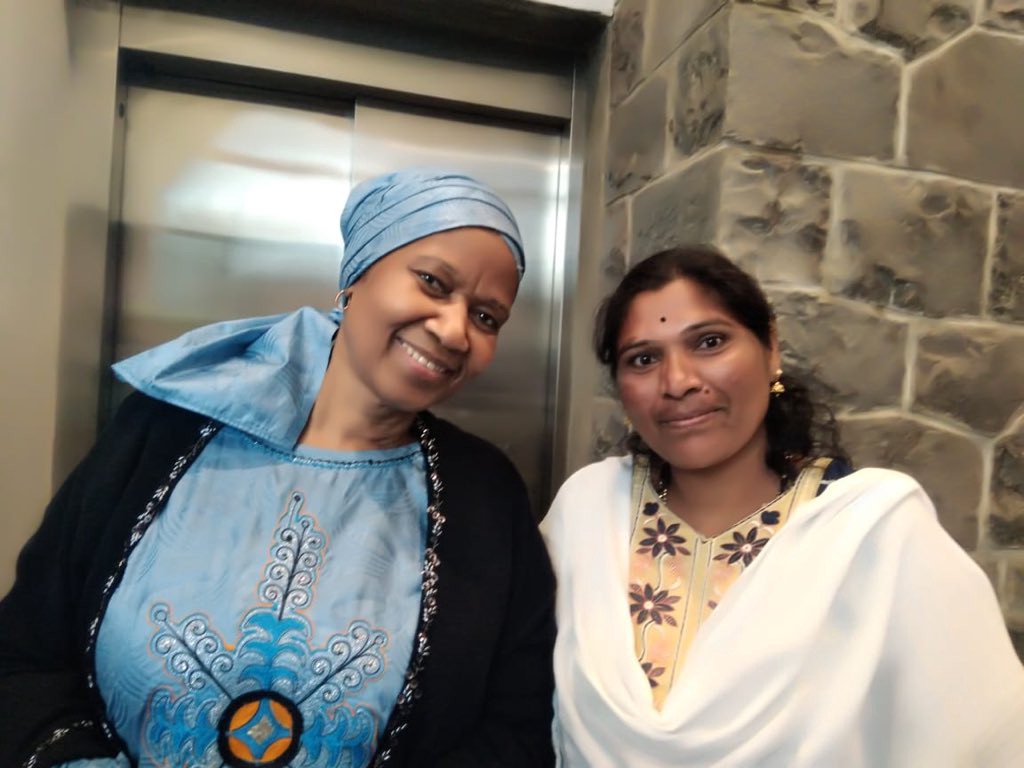 Susheela K.M. is the infomediary in charge of the community information centre, Naganahalli panchayat, H.D.Kote block, Mysore district. This centre is part of a network of eight such information centres set up and managed by IT for Change’s field centre Prakriye, in partnership with local women’s collectives, as part of its efforts to develop an innovative digitally-supported strategy for socio-political empowerment and civic leadership of marginalised women and girls. Day-to-day operations of the centres are managed by young women infomediaries recruited from the local community and trained by the Prakriye team in: filing and tracking welfare applications for socio-economically marginalised community members through online government portals and a custom-made digital MIS system; using participatory video and mobile voice messaging for public information outreach and learning dialogues on women’s rights and gender equality; and designing and implementing community data surveys and GIS-enabled social audits of public schemes and services to strengthen gender-responsive local governance. Since 2018, with support from Edelgive Foundation, Prakriye has also been working on facilitating access to justice for victims of gender-based violence, by setting up gender help desks providing para counselling services for crisis support and breaking the culture of silence through media-supported public dialogues. Some infomediaries (including Susheela) have also been inducted as para counsellors as they already play the role of ‘trusted confidantes’ for many women in the villages they work in.

In February 2019, Susheela had an opportunity to participate in two forums in New Delhi: a ‘young feminist leaders dialogue’ with Madame Phumzile Mlambo-Ngcuka, UN Under-Secretary-General and Executive Director of UN Women, on how grassroots leaders contextualise the principles of the Beijing Declaration in their work; and the finale of the Dignity March, an initiative of the Rashtriya Garima Abhiyan as part of which, survivors of violence from across the country led a march across 200 districts of 24 states that culminated in Delhi, in order to call for institutional support for access to justice for victims of violence. In this blog, Susheela reflects on this experience.

When I heard of the opportunity to travel to Delhi, I was very excited and immediately wanted to say yes. But I also had to convince my family members. Many tried to dissuade me, saying that it is not correct to leave my young children behind and travel by myself, even if for a few days. But finally after a lot of effort, they were convinced. It felt like I was leaving the country and traveling abroad, when in reality I was merely traveling to another state in my own country! I’ve only seen these places on television before; never imagining that one day, I would go there myself!

The airport was extremely big and crowded. One thing that I noticed was the stark, undeniable difference between urban and rural men and women. Even the type of food that we eat is very different. The concept of flight travel was very new to me. The usual mode of transport in the village is the local bus. There isn’t any need to make a reservation there, and even if you miss a bus, you can wait and take another one. It is not the same for flights. If you book one flight, you have to travel by that only; if you miss it, then you will have to pay a lot of money, and you may not even get a ticket at times.

When we got into the flight, I realised that our seats were located one behind the other. Anupama madam [Coordinator — Programs, Prakriye field centre, IT for Change who accompanied Susheela] immediately made a request for us to be seated together which was allowed. My heart raced as I sat down. As the flight took off, my ears were blocked, I was shivering and I held onto my belt tightly. Anupama madam told me to relax and to treat the situation as if I were travelling to a village. Finally, I somehow managed to force myself to sleep. We reached Delhi quite late, so we did not have the time to explore the airport. We immediately took a taxi and went to our hotel.

Next day, the meeting started at about 3 PM. Anupama madam had helped me prepare. I was to talk on issues of women’s economic empowerment and digital inclusion. But this was not easy as I had many limitations. In terms of language, I only knew Kannada while everyone in the room spoke English or Hindi. While I knew that Anupama madam would translate what I said, I was restricted in terms of interacting with the others — I could understand what they were saying but I could not reply. It was then that I decided that I must ensure that my children must never face this problem — they must know languages other than Kannada and must never be restricted from expressing themselves merely because of a language barrier. Apart from this, we were all given only a few minutes to speak, ranging from 2–5 minutes to 8–10 minutes. There were around 50 attendees and each person had a specific seat allotted. They were all extremely friendly and greeted me warmly. I introduced myself and then they hugged and welcomed me. This made me very happy, but at the same time I was very nervous.

The meeting began and each person began to speak. I could understand bits and pieces of what they were saying. They spoke about how women in their areas faced violence. They also spoke about the problems of inequalities of gender and caste. Finally at 6.10 PM they said, “Susheela, it is your turn. You have two minutes to speak.” I then went on the podium with Anupama madam. As they adjusted the mike, nobody made a sound. There was complete silence in the room and everyone looked at me eagerly, curious about what I was going to say.

I was reluctant to speak. Would they be able to understand what I said, particularly because I was speaking in Kannada? I explained to them about how the women of H.D. Kote have to encounter problems such as the patriarchal mindset of the Panchayat and the residents of the village, issues of violence, as well as poor access to healthcare, education and other primary resources. I then spoke about how we use a range of digital strategies for empowering the women in the villages we work in — community video screenings, Anjali Akka mobile voice messaging serial to spread awareness on gender based violence, and so on. I also shared with them the positive social, economic and political impacts that could be seen as a consequence of training women and adolescent girls to use ICTs — the breaking of the myth that only men could use technology, access to wider employment and financial opportunities and enhanced political participation by women. After I was done, everyone clapped. Anupama translated what I said, and this was followed by another round of applause. The meeting then broke for tea. The butterflies in my stomach prevented me from eating anything. But everyone in the room hugged me tightly and congratulated me. I could not understand what they were saying but kept acknowledging them as they repeated my name. “Susheela! Susheela!” Anupama madam laughingly asked me how I became so popular within such a short span of time and encouraged me to enjoy the attention.

An hour later, the meeting came to an end and we went back to our hotel room.

The next day was spent exploring the city. The highlight of my day was my travel in the metro. I had only seen it on TV and now I was actually sitting in one. But the stations were extremely crowded and I was terrified of getting lost. I didn’t let go of Anupama madam’s hand and sometimes held onto her dress as well. She was very good to me and assured that nothing wrong would happen. Both the metro and the people travelling by it moved so fast, everything happened in the blink of an eye.

The second event, the final day of the Dignity March, focused on the experiences of the survivors of domestic and sexual violence. Women from all over the country ranging from Bollywood actresses to ordinary women like me marched all over the country to spread the message about such violence. The March included women of all ages, from 18 to 65 plus. There were young women holding infants in their hands, some had come in colorful dresses — I think they were from Rajasthan. Overall, it was a very interesting forum. Women spoke about their experiences of violence and more importantly, about how they survived these experiences and came out stronger. The difference between the event that I had attended on the first day and the event on the second day was that the former had empowered, well-to-do women who had helped those who faced violence, and the latter involved the survivors themselves. If there was one important thing that I learned from these interactions, it was that violence against women is universal. It occurs everywhere. Everyone spoke about their vast and varied struggles and experiences of violence faced by them. This violence was from within their own families — perpetrators were their husbands, brothers, fathers. There were also survivors of acid attacks who shared stories of their fights. Violence for them is a daily struggle. Many of them had attempted to harm themselves and end their lives. The struggle against violence is the struggle within. My blood boiled when they screamed “Zindabad zindabad!” They demanded that the government take effective action against the perpetrators of the violence and punish them. This made me think — women go through so many hardships on a daily basis. All that people like I can do is support them to some extent. I can only tell them to fight back and stay strong.

I returned to my village on Saturday and on Monday, was flooded with four cases of violence. If there was one important learning that I took back from my experience in Delhi it was this — that women should not be ashamed to talk about their experience of violence. Women are no more afraid of being labelled as “victims”. Women who come to my information centre whisper in my ears that they have faced domestic or sexual violence. I will now explain to them that they must not be ashamed of their situation. They have done nothing wrong and they must fight back against the actual wrongdoer, the perpetrator of the violence. The four days in Delhi not only gave me the opportunity to explore different facets of a life completely different from what I had known, but also opened my mind. I now know, and I keep reminding the women, that we are not alone in this fight against violence, and we must never forget that.

Translated from Kannada by Sarada Mahesh

Read this blog on our Medium page.