Public Statement on Impacts of Walmart-Flipkart Deal: Please sign on

The US based Multinational Corporation (MNC) Walmart’s acquisition of Flipkart undermines India’s economic and digital sovereignty and the livelihood of millions in India. If the $ 16 billion deal goes through, two US companies (the other being Amazon) will dominate India’s e-retail sector. They will also own India’s key consumer and other economic data, making them our digital overlords, joining the ranks of Google and Facebook. 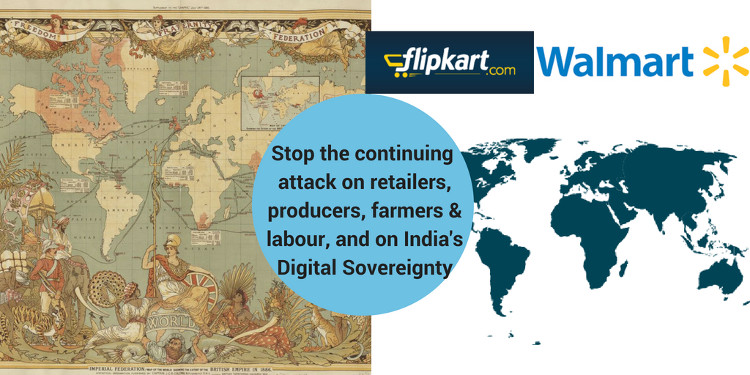 The acquisition of the largest e-commerce firm promoted by Indian entrepreneurs is the latest step in a series of developments aimed at circumventing the existing cap on FDI in multi-brand retail by permitting foreign-owned online retail in India, and developing a digital stranglehold by foreign companies over India’s consumer goods value chains.

This process saw the gradual take-over of majority stake in the formerly Indian-owned Flipkart, the entry of the world’s largest e-retailer Amazon, and now the take-over of Flipkart by Walmart. Jack Ma, head of China’s Alibaba, says all e-commerce companies now have integrated online and offline strategies, consolidating operations towards one ‘new retail’. This is also evidenced by recent moves in the US by Walmart to enter e-retail and by Amazon to move into brick-and-mortar retail. It should therefore be clear to everyone that allowing FDI in e-retail in India is but a back-door entry of foreign players into multi-brand retail. Ironically, the same political party, which a decade ago strongly opposed the entry of Walmart into India, is now happy to welcome its far more powerful, digitally-enabled avatar.

India’s domestic digital retail industry will of course suffer by the domination of these two US MNCs. But worst affected will be small brick-and-mortar retail stores accounting for over 90% of the Indian retail sector,  SME manufacturers, small delivery companies and suppliers of goods including farmers whose margins will be ruthlessly squeezed, with their behaviour digitally-controlled. Walmart is well-known for its global supply chain, especially of cheap goods from China, which means local manufacturers and suppliers will suffer deep hits.

This is similar to what would happen with FDI in brick-and-mortar multi-brand retail. It will, in fact, be worse, as digitally-enabled ‘new retail’ becomes omnipresent and omnipotent. The concentration of economic power with the two US MNCs, now constituting a potential duopoly in India, will render them too powerful to be meaningfully regulated. In the US, the trail of destruction of small stores, local businesses, small manufacturers and countless workers left behind by Walmart and other giant retailers is well documented, and the EU has also witnessed the same. ‘New retail’ seeks to own and control key data of all trading activity across sectors resulting in unassailable power. National policy or regulatory remits over them would then be as ineffective as they currently are over Google or Facebook.  Manufacturers, suppliers and traders, producers and service providers, all become enslaved to digitally controlled platforms, working as per their parameters, but denied any rights or benefits. In this context, it is critical that the Competition Commission of India (CCI) examine the issue of monopolistic trade practices vis-a-vis this deal.

It is argued that Walmart and other retail giants will generate employment, but of what kind? Walmart has a long history of busting trade unions, violating the right to collective bargaining, paying poverty wages and disregarding social security laws. In e-commerce, work will also be outsourced to couriers and other service providers, making it a long stretch to prove that they are workers. Further, even if Walmart and Amazon employ a few thousand more, they are unlikely to neutralise the massive employment loss associated with the collapse of both the formal and informal retail sector. In this business model, whether in retail or in so-called ‘aggregators’ such as Uber, the giant corporations provide temporary benefits to consumers, and hence appearing to be on their side, by squeezing everybody in between including small producers and the vast majority of workers in the supply chain.

Digitalisation will soon be central to a wide range of economic activities, many of these being controlled by MNCs. A sovereign nation must be able to regulate e-commerce companies, making them comply with policies that uphold public interest, and ensuring that all economic actors get their fair share. This will be next to impossible with giant corporations operating from abroad and storing all their data overseas. There is an urgent need to reverse the entry of foreign e-commerce companies and their take-over of Indian entities, and to evolve effective regulations to govern the operations of domestic entities and protect the interests of the different players involved.

Digital companies such as Google and Facebook frequently refuse government or court orders for content take-down  asserting that their data, algorithms and platforms operate from the US, and are subject to the latter’s laws. It will not be very different for data and Artificial Intelligence powering e-commerce platforms. This is what makes it extremely difficult to nationally regulate global digital companies, including e-commerce ones, and the reason that digital platforms in key sectors, including on-line retail, should be domestically owned.

After trailing behind India in software technologies till a decade back, China is now a global leader in digital technologies. China has been able to leverage its growing software capability because it has incubated domestically-owned digital e-commerce systems such as Baidu, Alibaba and Tencent, which also store their data locally.

The Government is seemingly blind to, or does not care about, the extra-ordinary dangers that the country would face if India’s e-commerce ecosystems are foreign-owned and controlled. Not just China, but the US and EU have also begun to disallow foreign takeovers of digital companies considered of strategic or economic importance. If the growing tendency of foreign control of digital platforms in key sectors is not resisted and reversed, India runs the danger of what has been called digital colonization.

Citizens of India should be deeply concerned about the ongoing developments in the e-commerce and especially the online retail space, the latest of which is the Walmart-Flipkart deal. We the undersigned, call for an urgent national debate on this important issue of economic independence and digital sovereignty, affecting the interests of many millions of Indians in different walks of life from workers to farmers, small shopkeepers and suppliers, manufacturers and traders, and a host of service providers, apart from potentially compromising consumption data of hundreds of millions of Indians.

Pending a national debate involving all the affected constituencies, and an informed collective decision based on it, we further demand that the Government of India halts Walmart’s takeover of Flipkart, upholds the policy of restricting FDI in multi-brand retail, and draws up a policy in consonance with this for online retail. We also seek a comprehensive policy on leveraging the strategic value of India’s data for the interest of India and her people, and on domestic ownership and regulation of digital platforms in key sectors.

PLEASE SEND YOUR ENDORSEMENTS TO: ITfC [at] ITforChange.net by 31 May 2018.

6. Chamber of Associations of Maharashtra Industry and Trade (CAMIT)

10. Focus on the Global South 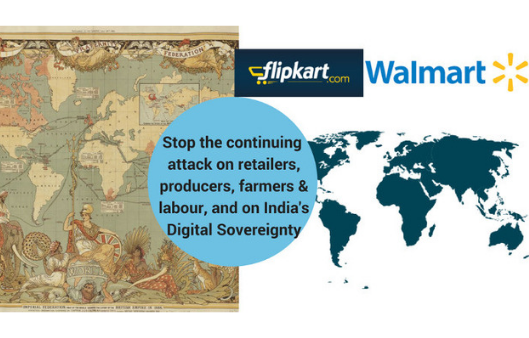