IT for Change, Kutch Mahila Vikas Sangathan (KMVS), and Area Networking and Development Initiatives (ANANDI) collaborated in the 'Making Women's Voices and Votes Count', a two-year field project funded by UN Women, between January 2013-June 2015. Under this project,the three organisations with the support of the National Mission for the Empowerment of Women, aimed at using ICTs to catalyse a critical mass of women in local governance, construct a horizontal platform for peer-based support, and develop a discourse of governance and politics that is informed by women's rights perspectives. Specifically, the three organisations sought to harness the propensities of ICTs in their local organising efforts with Elected Women Representatives (EWRs) and marginalised women's collectives. IT for Change worked in Mysuru, Karnataka and the other two organisations in Gujarat.

Between January 23 and 24 2013, IT for Change, Kutch Mahila Vikas Sangathan (KMVS), and Area Networking and Development Initiatives (ANANDI) organised a project planning meeting in Jan Vikas, Ahmedabad . The primary purpose of the meeting was to build a shared understanding of the project and agree upon key processes and commitments. The meeting began with a presentation from each organisation on their work so far, on women's political empowerment; and their reflections on the possibilities opened up by technologies. This was followed by a discussion on consolidating the big ideas, and working out the operational modalities of the partnership.

The key decisions arrived at the meeting were as follows: 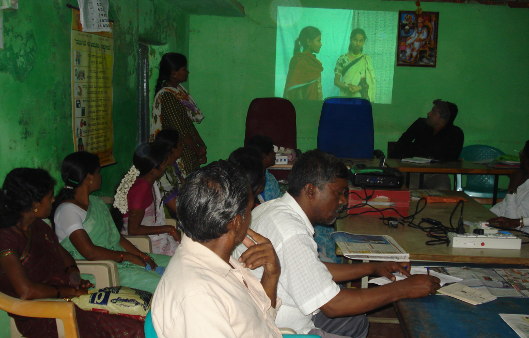