School closures for a major part of the last two years due to the pandemic has impacted different children in different ways; many have not received structured learning opportunities. A majority of them are likely to have not progressed in their formal education and have also lost out on skills and knowledge they had acquired, owing to lack of practice, mentorship and guidance from teachers, and other hardships they may have suffered. A teacher is, therefore, likely to find even greater variations in levels of learning and engagement in her class now. Alternate strategies and additional resources are required to respond to children’s diverse needs.

A worksheet is one such resource that can be designed to engage students, regenerate their interest in learning, and build curiosity. The ‘work’ in the worksheet can transcend disciplinary boundaries and need not be limited to solving mathematics problems or answering memory-based questions. Worksheets can be used for exploring and developing pschomotor, analytical, spatial and communication skills by prompting learners to engage in elements of constructivist pedagogy, like observing phenomena, collaborating with a classmate in a game, having whole-class discussions, or expressing one’s thoughts. This article discusses some such examples.

Worksheets for collaboration and play

In the months after the second wave when primary and middle schools were shut, we r 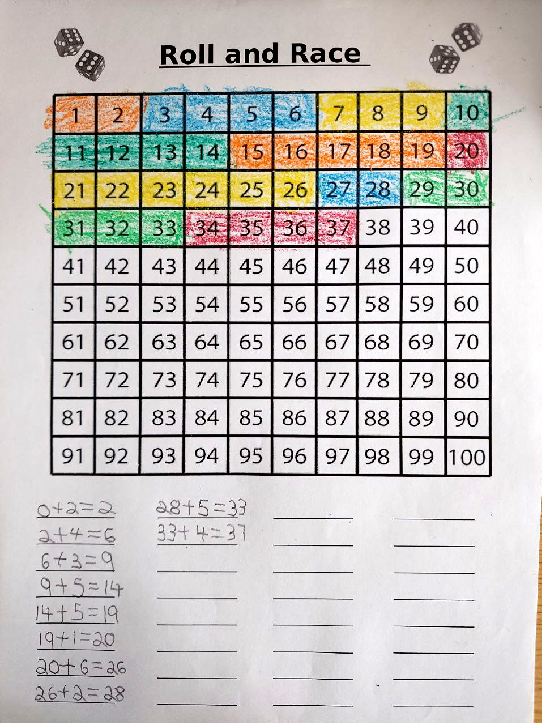 an a community learning centre for children of classes I-VI in a low-income-group community in Bengaluru where we found that worksheets could be used as a way to promote collaboration among peers. One such example was the number-grid race in which students are divided into pairs or small groups and given a pair of dice and some colours. Each child is handed a 100-grid worksheet with some empty space at the bottom. Children take turns to roll the dice and colour the corresponding number of squares in the number grid using a different colour each time. The child who reaches 100 first, wins.
There can be several variations in using this worksheet for children of different ages and learning levels. For younger children, the grid could go only up to 50 and be played with just one dice. Slightly older children can be asked to colour the boxes after performing addition in each turn with the previous sum and the number on the dice being the addends. For example, if the child gets 5, 4,and 6 in the first three turns, the addition equations would be 0 + 5 = 5, 5 + 4 = 9, 9 + 6 = 15, and so on. They might start seeing a pattern and eventually realise that their sum correspon 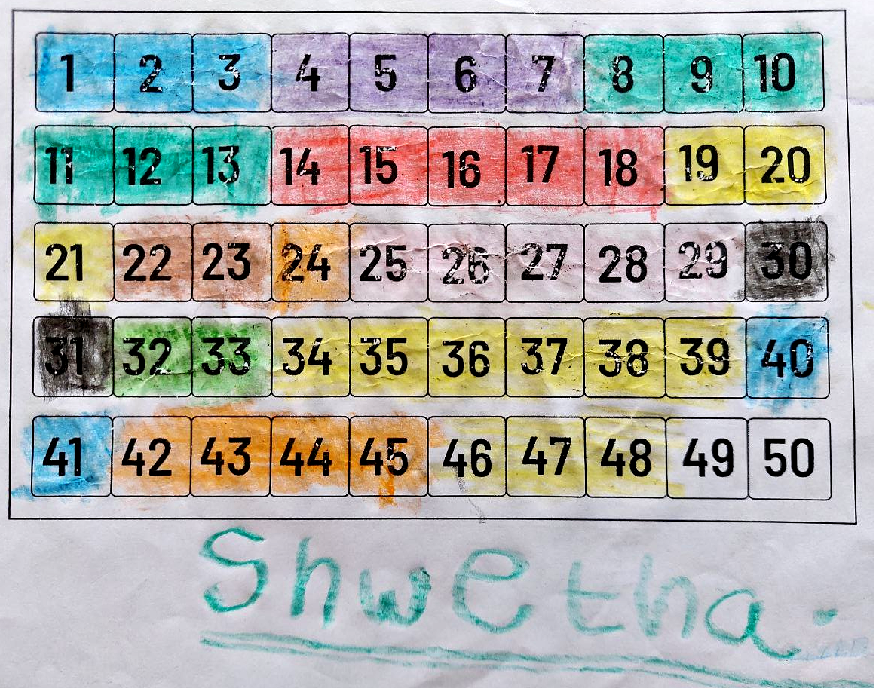 ds to the number in the last square coloured in their grid. This observation can be used to initiate a discussion on whether it holds good for every turn for everyone and to help them realize that the same count-on strategy they use for performing addition is what is being done when they colour the boxes as well. When they use their fingers, the last finger counted gives the sum and when colouring, the last box coloured represents the sum.
The game can also be played starting from 100 and going in reverse to reach 0, calculating the difference in each turn. It can also be played by having pairs of children as teams who share a worksheet and each of them takes turns to roll the dice, colour the boxes, write the equation and find the sum/difference. The worksheet, in this case, promotes engagement with peers in the form of a game while also creating opportunities for individual practice in working with numbers.

As part of one of our school-level programmes where we engaged with students from a government-aided school, a worksheet was designed integrating aspects of language competency-building and knowledge in geography. A crossword puzzle, which is a fun way to improve spelling and build vocabulary in English, was created using an online tool based on the theme Rivers of India. This brought out students’ knowledge of the names and facts about the rivers in the puzzle, along with the spellings of each. Designing an activity based on this worksheet could involve solving the worksheet and then following it up with a discussion about rivers and their significance, classification based on origin, whether they are major rivers or tributaries, which sea or ocean they flow into, aquatic life in rivers, river pollution and its consequences, etc. Or it could help build language skills by having students share their experiences and stories of rivers which they have seen or are familiar with.
Worksheets that cut across disciplines can be used to bring out relationships between different subjects, support a holistic understanding of concepts, and help children make better sense of the world around them. Taking the above example further, a follow up worksheet with a map of the rivers of a region could be given to students, asking them to think of ways in which the length of a river could be measured. This can help students appreciate and apply the mathematical concepts they have learnt while making sense of the geography aspects as well.

During the lockdown in 2020, our team conducted online classes for students of government and aided schools in Bengaluru South, Block III. As part of one of the science activities, a worksheet was used to pique students’ curiosity and develop a spirit of scientific inquiry by asking them to record observations of the moon over a period of two weeks. The worksheet was shared through a WhatsApp group and every day, the students were asked to document in their notebooks the shape of the moon, its position (north/south/east/west) and the time of observation according to the format given in the worksheet. Several students in the group participated enthusiastically sharing photos of the moon and what they had been documenting. At the end of the activity, we had discussions about why the shape of the moon appears to change, why it is only visible when dark, and its position in the sky. In this case, the worksheet served as a tool to help children wonder, investigate, inquire and understand the theory behind the waxing and waning of the moon. [image: moon observation and moon observation format]
This type of activity can be contextualised to suit different learning objectives for children of different age groups. It can cover observation of other natural phenomena, such as sunrise/sunset timings, flow of rainwater, growth of plants, animal sounds etc.

When schools opened in September 2021 in Karnataka, IT for Change organised ‘Back to School’ camps in government and aided schools with the aim to help children get re-accustomed and comfortable with the school environment and with one another while they engaged in fun educational activities. A Tangrami activity using worksheets was designed to allow students to create shapes for themselves. Students could potentially develop spatial understanding by playing around with the shapes, called tans, solving the Tangram puzzles. The worksheet had the shape outlines printed, which could be cut out and coloured to make the Tangram pieces. Different puzzles of varying complexity were then given to the students to explore and solve. [image: tangram]
Various mathematical concepts too were explored using these shapes which helped children understand properties of the shapes, visualise congruence as the pieces could be placed one on top of the other, and recognise the relationships between the shapes.

The work of IT for Change in education focuses primarily on the integration of digital technologies in the areas of teacher professional development and school development, laying emphasis on ‘creating and learning’ and ‘connecting and learning’ approaches (these are themes from the National Information and Communication Technology Curriculum). The worksheets described above were developed using FOSS1 (Free and Open-Source Software) tools, taking inspiration from online sources like resource repositories, teacher blogs, and other educational websites. Teachers can similarly draw upon the wealth of material available online to conceptualise their own worksheets and reimagine the different ways in which worksheets can be used in teaching-learning. While the internet holds a myriad of ideas and resources that can be accessed with ease, their educational value is determined mainly by the way in which the material is contextualised and customised in terms of language, age appropriateness, learner abilities, etc., to meet learners’ needs. Teachers may not always find ready-made worksheets that are fully relevant to their learning objectives and available for all subjects/topics. Use of FOSS tools that are freely available, to adapt and contextualise Open Education Resources (OERs) that are available in the public domain can greatly facilitate teachers in creating, developing and sharing worksheets and other resources.
This is not to say that use of digital tools is a necessary condition for worksheet creation, only that it opens up many more possibilities. In our work with teachers and schools, we have witnessed teachers using FOSS like LibreOffice, GeoGebra, PhET to create worksheets and other teaching-learning resources.

Acknowledgement
This article was made possible by valuable inputs from my team members Gurumurthy Kasinathan, Neeta Jose, Marzia Ibrahim and Girija MP.