With the support of the South Asia Women’s Fund, the Prakriye field centre of IT for Change initiated a year-long capacity-building programme for strengthening the agency, autonomy and leadership of 85 adolescent girls in rural Mysore, in March 2016 -- Dhwanigalu. This training programme effectively combines traditional and technology-mediated learning methodologies such as digital story telling, photo-essays, role-plays, simulation exercises and debates to trigger learning dialogues at the grassroots. The training curriculum that was used between 2016-2017 is provided below.

Between March-August 2016, the Prakriye team worked with 85 girls in 4 villages of Hunsur block, Mysore district, establishing rapport and initiating conversations on gender norms, gender scripts, gender roles and the status of women and girls in the community. As a large number of participants had signed up, the training sessions were held in 8 sub-groups. 2 sub-groups were formed in each village: one for girls aged 12-14 years, and another for those in the 15-17 years age-group). The specific session plans and learning methodologies used are provided below. Click on the module title, to read more.

The Prakriye team collaborated with the Srishti Institute of Art, Design and Technology in Phase 2 of the project, to deepen the dialogues initiated in Phase 1 by introducing creative methods from Art and Design practices. This Phase, titled ‘Gathering Echoes’ is inspired by the disciplines of Human-Centered Design and Participatory Design.

In this phase, towards the larger  aim of facilitating  adolescent girls’ capabilities to navigate their future, we experimented with materials, shapes and messages that we discovered through visual representations, building low-cost prototypes, body performance, narrative and debate. These iterations will go towards supporting the Prakriye team in establishing community dialogues about gender equality, portray images of women’s leadership in the public sphere and convert aspirations of adolescents into actionable tools to pursue change. 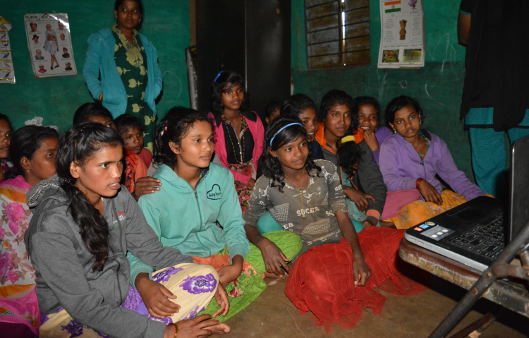